Learn To Play From The Best

Over 0
Student Shows & Concerts
ABOUT US
Since 2001 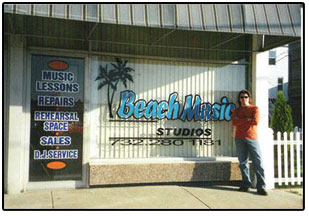 Beach Music Studios is owned and operated by popular Jersey Shore singer/songwriter Danny White. Danny has performed across the country as singer/songwriter/guitarist of the Danny White Band and also as a solo/acoustic performer. Danny has released four full length CD’s of original music. His most recent release “A Beautiful Crazy” was recorded with & produced by C.J. Eiriksson (U2’s engineer/mixer) and Mike Wanchic, longtime producer and guitarist with John Mellencamp. Wanchic has worked with Mellencamp since the early 80’s along with Bob Dylan, Dave Matthews Band and The Black Crows. Danny was invited to Austin, Texas & Bloomington, Indiana, where he completed the CD with Eiriksson & Wanchic producing and John Mellencamp’s band backing him on two of his original songs and has been getting rave reviews ever since. Danny is in the process of finishing up another new CD with Eiriksson and legendary engineer Shelly Yakus (John Lennon, Tom Petty, U2, The Band) which is set for release next spring. The CD’s are available at i-Tunes & dannywhitemusic.com

Learn From The Best

Our music lessons teach you more!

Techniques and exercises to get you started

Songs selected by the student or instructor

Maintenance and care of your instrument

Getting acquainted with and reading music books and sheet music

What Our Students Say